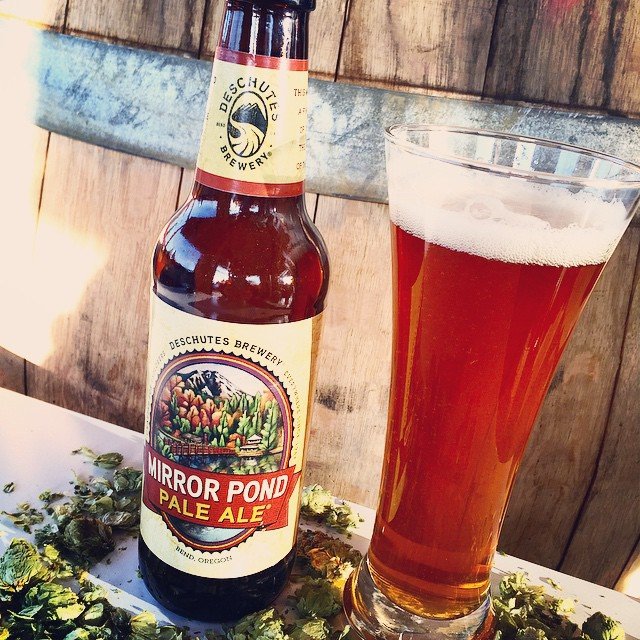 Brewery: Deschutes Brewery in Bend, OR

Drink this: After a hard day of work

Pair with: a juicy cheeseburger and fries

Having an American Pale Ale on hand is always a good idea. American Pale Ales are a go-to session beer. Session beers are not too heavy, or too high in alcohol content. There are tons of great IPAs and stouts out there, but an 11% beer can put you over the edge. Sometimes you want to drink more than a few beers. That’s why we grab a Pale Ale. They have more hops and flavor than a pilsner, but aren’t as crazy bitter as an IPA. There are tons to choose from, but today we chose the award-winning Mirror Pond from Deschutes Brewery in Bend, Oregon. At 5% ABV it’s about as strong as your average pilsner. It has 40 IBUs (International Bitterness Units, a scale in the beer world to judge the bitterness), which gives it a bite at the end. Mirror Pond is a rich auburn-gold color. It’s made with Cascade hops; it’s pretty hoppy for pale ale, but it isn’t overwhelming. It has a lot of carbonation giving it that refreshingly crisp taste. Deschutes uses a blend of malt (pale malt, mostly), and you definitely get the malted taste, but not heavy or overpowering. It doesn’t have a yeast flavor, more common in a Belgian Pale Ale. There are some honey and citrus notes, with a sweet and clean pine scent. Probably the most common American Pale Ale is Sierra Nevada Pale Ale, which is also great, but we chose Mirror Pond because it’s a little lighter, and more refreshing. Keep a six-pack in your fridge for after work, or bring it to a party- everyone loves this beer.

The world of American Craft Beer is ever expanding, and it can be difficult to manage. We’ll be doing regular beer and brewery reviews, giving you suggestions and taste notes.