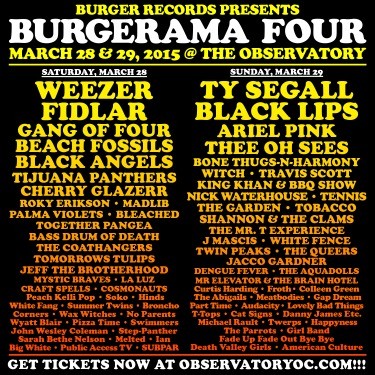 Musical Festival season is almost here. If you’re looking for a festival experience and don’t want to break the bank, Burgerama is for you. If you’ve already bought your Coachella tickets, think of Burgerama as a warm-up. Burgerama is a 2 day festival in March at the Observatory in Santa Ana. It’s a short drive (less than an hour) south from Los Angeles, and a little over an hour north from Downtown San Diego. Last year the festival had indoor and outdoor stages, so it’s expected to be similar this year. The line-up is pretty solid. While Burgerama is definitely not as diverse musically as Coachella, you can see Thee Oh Sees and Bone Thugs-n-Harmony in the same day. A two-day pass is only $90! VIP Pass is $120 and you get a t-shirt, 3-D glasses, and some other perks. You can afford this weekend. Weezer is headlining Saturday and Ty Segall is headlining Sunday. Burgerama is awesome for listening to lesser-known bands. In a year or two, some of these groups will be selling tickets for a $60 Wiltern show, so you can’t beat the deal. Santa Ana is a great place to explore, and we recommend staying locally to maximize the experience. An easy weekend getaway, you can have breakfast at the Gypsy Den and explore Santa Ana, or cruise to nearby Newport Beach. We’ll definitely be checking out the Tijuana Panthers, Bass Drum of Death, Ariel Pink, Nick Waterhouse, and Tennis. We also hope to hear some new bands we haven’t been exposed to.  We’re also crossing our fingers that Weezer plays Hash Pipe. Get tickets here, and we’ll see you March 28th & 29th at Burgerama!